The AR/Location-based game market was pretty much born with the release of Pokémon GO back in the summer of 2016. Some games had made use of the technology before, but everything jumped to a whole new level when everyone across the world was chasing Pokémons. It was a phenomenon with visibility unmatched by any other mobile game thus far. Now we have a follow up from Niantic in the form of Harry Potter: Wizards Unite. But how does it fit in with Niantics own Pokémon GO and the rest of the competition?

The AR/Location-based game market is still a relatively small genre in the bigger picture of mobile gaming. For example, using Gamerefinery’s Market Share tool, we can see that it only has around a 2.6% share of IAP revenues in the US iOS market. 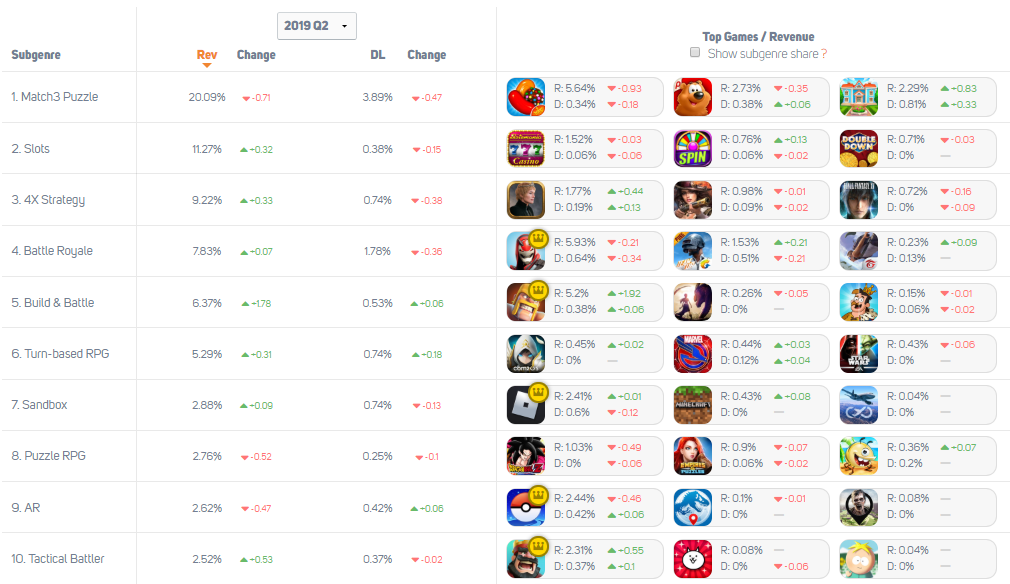 How about inside the subgenre? How is revenue in AR/Location-based games divided between different games? Ever since Pokémon GO’s launch we’ve seen multiple games that have tried to get a piece of its huge pie. But in terms of revenues, it remains the undisputed king of the genre.

Pokémon GO alone generates a whopping 93% of the subgenre’s IAP revenues on iOS in the US. Games like Jurassic World Alive from Ludia or The Walking Dead: Our World from Next Games have been able to get a small share of the market but are still nowhere near Pokémon GO.

But now we have a new entrant into the space, as Niantic finally released their follow-up title to Pokémon GO backed by another super popular IP: Harry Potter: Wizards Unite. In this blog post, we’ll take a quick peek into the game, how the gameplay loop works, what are the monetization sinks in the game and how it compares on a feature level to other titles in the genre.

Harry Potter: Wizards Unite has been out for a couple of weeks, debuting at the top of the download ranks and around top 60 grossing in US iOS, jumping to the top 20 grossing by the following day. However, since then it’s experienced a slow decline in ranks. The game’s still in the early phases of its lifecycle, but the start definitely hasn’t been a similar mega success as Pokémon GO was for Niantic.

The premise in Harry Potter: Wizards Unite is that a mysterious event called “The Calamity” has unleashed chaos, scattering magic items across the world and risking their discovery by muggles (non-magical people). Players step into the shoes of a witch or wizard and join the ranks of the Statute of Secrecy Task Force. They’re tasked with finding and retrieving those magic items called “foundables” from the world to ensure that the magic world remains a secret. 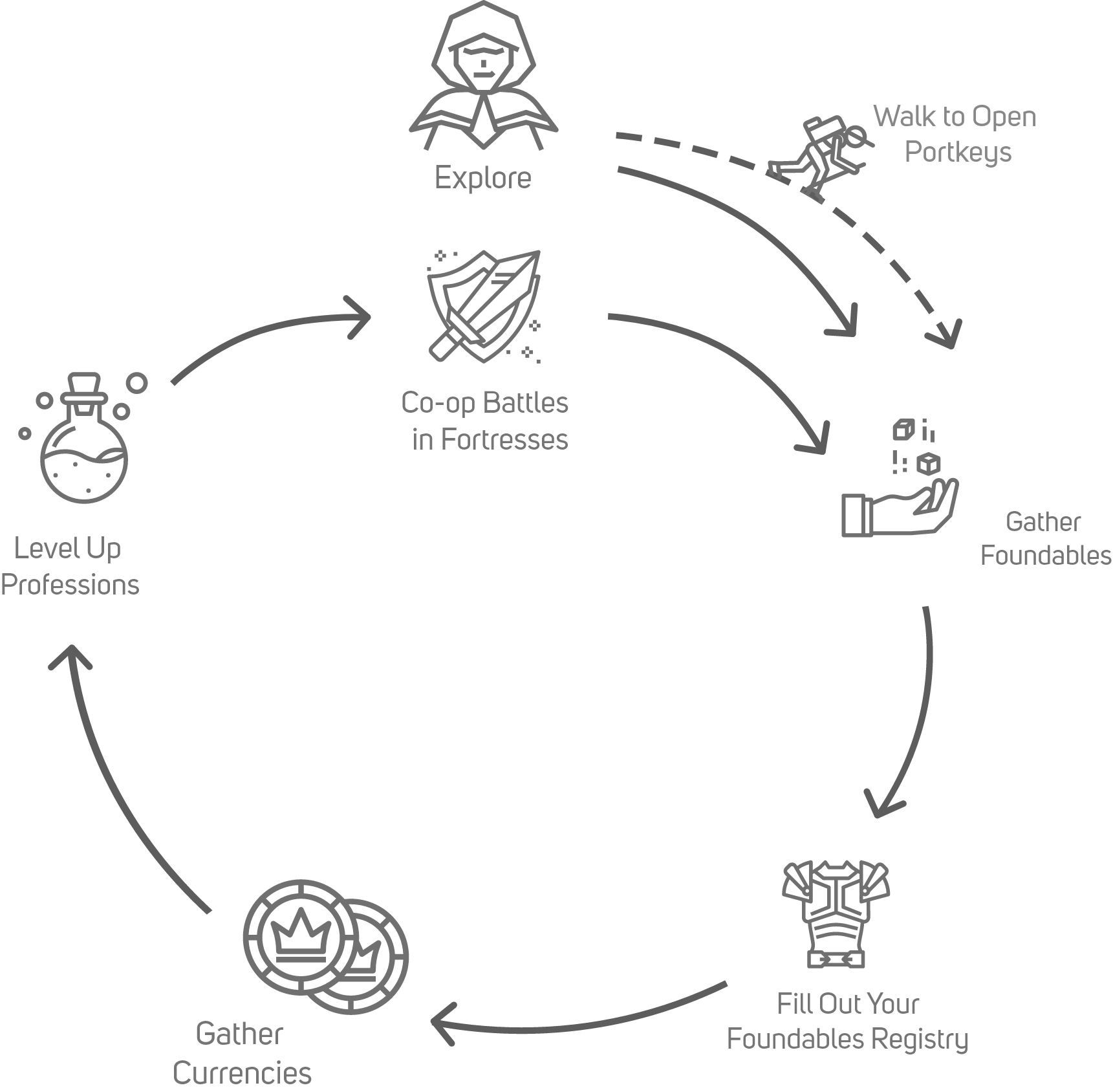 As mentioned before, the main goal for players is to find foundables. Players have a Registry of foundable items they have recovered and those they still need to find.

Foundables have different categories, for example, Dark Arts or Magizoology items. Each category has its own Registry Rank, which players then level up by collecting foundables from that specific category. When reaching a new rank, players receive a “Treasure Trunk,” which include rewards like Profession Scrolls and Runestones. Profession scrolls are a currency that is used to level up your character’s skills, and Runestones are consumable items that are used in Fortress battles to receive specific types of foundables. (More on Professions/Fortresses later)

There are multiple ways in the game to find foundables:

1) Exploring the real world and finding them on the map.

The primary source of finding foundables is the basic task of exploring the world around you, which is the core of all the location-based games. Players walk around and then foundable icons pop up on the map. Each foundable category has its own icon, and players never know which of the category’s items it is before tapping it and going into the core action layer. This system introduces some frustrating gameplay elements because often items are duplicates of something you already have. As a player, you don’t necessarily want to waste spell energy on catching something you already have because duplicates only give a minor amount of progress to your Registry Rank. For example, in Pokémon GO you always see which Pokémon pops up on the map, and then you can already decide if you’ll try to catch it or not. No tapping the icon required and easy to ignore if it’s not something you’re interested in.

The Core action layer of the game is very simple. Players trace a spell on their screen, and the result of the spell is dictated by how accurate and how quick they were. Each spell cast spends spell energy (equivalent to Pokémon GO’s Poké Balls) which you can replenish from Inns (comparable to Poké Stops) found around the real-world map. 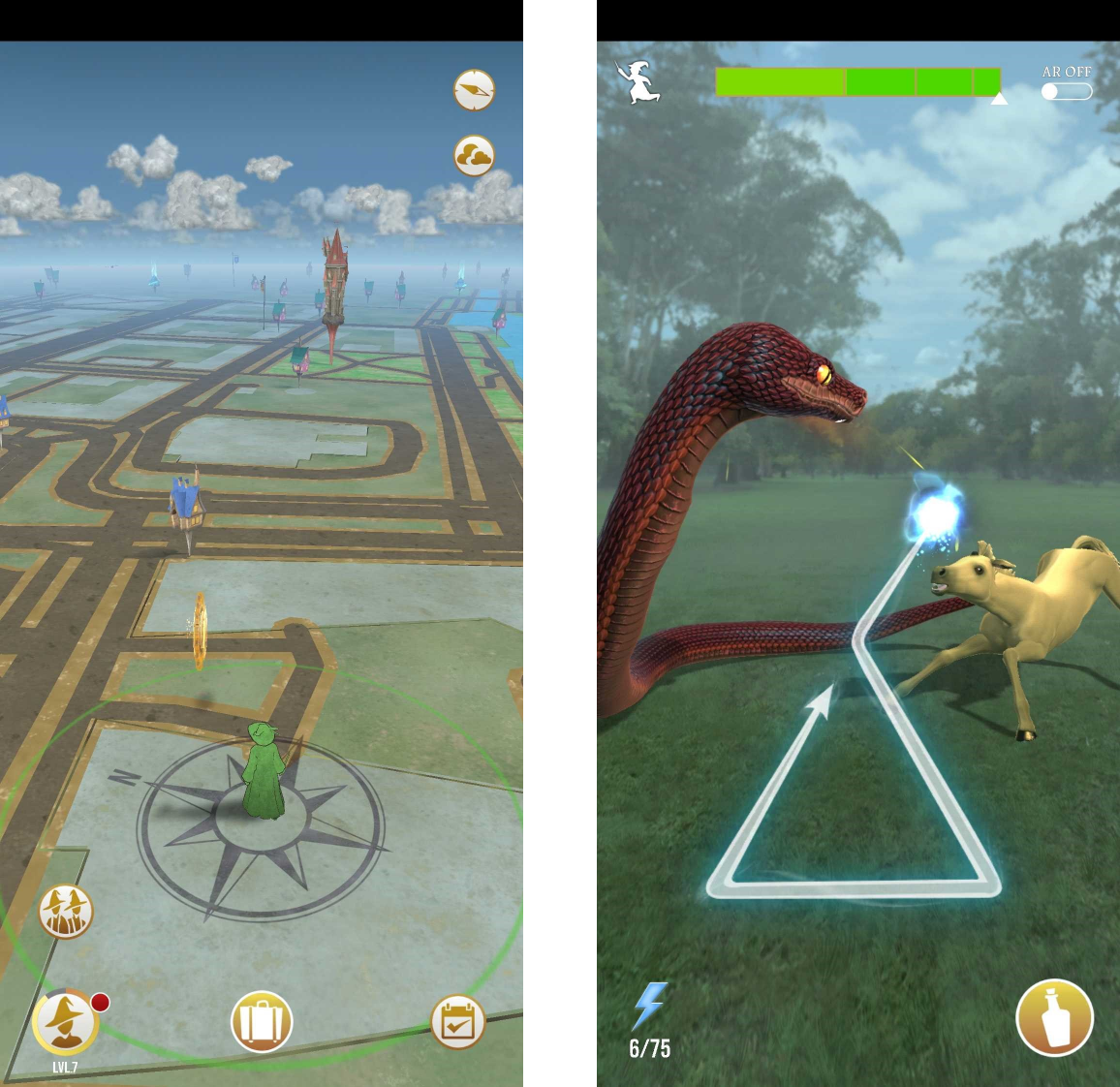 The core layer of Wizards Unite

Another way for players to find foundables is to open Portkeys. You can discover these chests across the map, and they come in three different sizes. The size dictates how long players need to walk to open them. One Portkey can always be “accumulating walking distance” for free, but you can start “accumulating distance” for multiple Portkeys simultaneously by using Silver Keys. They work in a really similar way to Incubators in Pokémon GO, but in Wizards Unite one key is used to open one box. Whereas in Pokémon GO your one incubator is able to open three eggs in total before “it breaks down.” 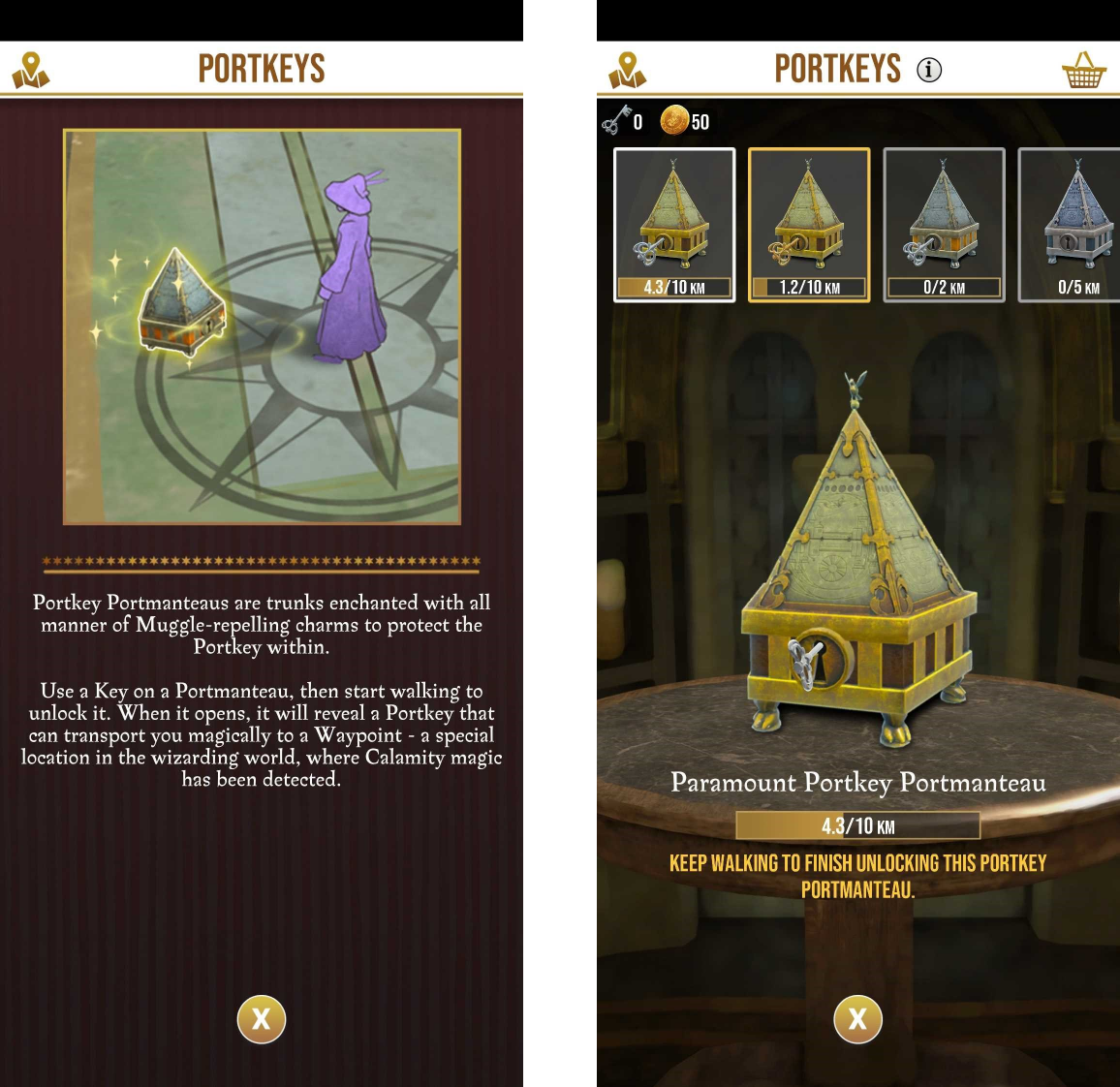 Portkeys are the gacha mechanic of Wizards Unite

After traveling the required distance, players can open the chest and summon a portal using AR. The implementation of this AR feature is something pretty unique compared to other location-based/AR games. Players summon the portal in AR, and then they need to walk through to teleport to another location. Within that location, players use their phone to find small “stars” in a neat little hidden objective minigame. After completing this task, players receive foundables, XP, and other items as rewards.

Opening of a Portkey

The third source for finding foundables is Fortresses found in specific places on the real-world map. These castles contain dungeons that have multiple challenges each more difficult than the last. Players need to defeat multiple enemies in a “gauntlet-type” dungeon to earn the rewards (check the video below for gameplay of a Fortress battle).

Different Runestones can also be used (earned from leveling up different Registry sets) to boost the rewards of a specific foundable type. You can, for example, use level 3 Hogwarts School Runestone to make sure you’ll get more foundables from that particular category. Some of the foundables are tied to Fortresses, so you can’t find them anywhere else which gives players an extra incentive to complete them.

What makes Fortresses special is that they can be played synchronously together with your friends. Grouping up with other players becomes vital for success especially when completing harder difficulties. This adds a tactical layer to the game because, given the different skill sets of each profession, players need to think about which professions each of them should choose (more on Professions in the next chapter). 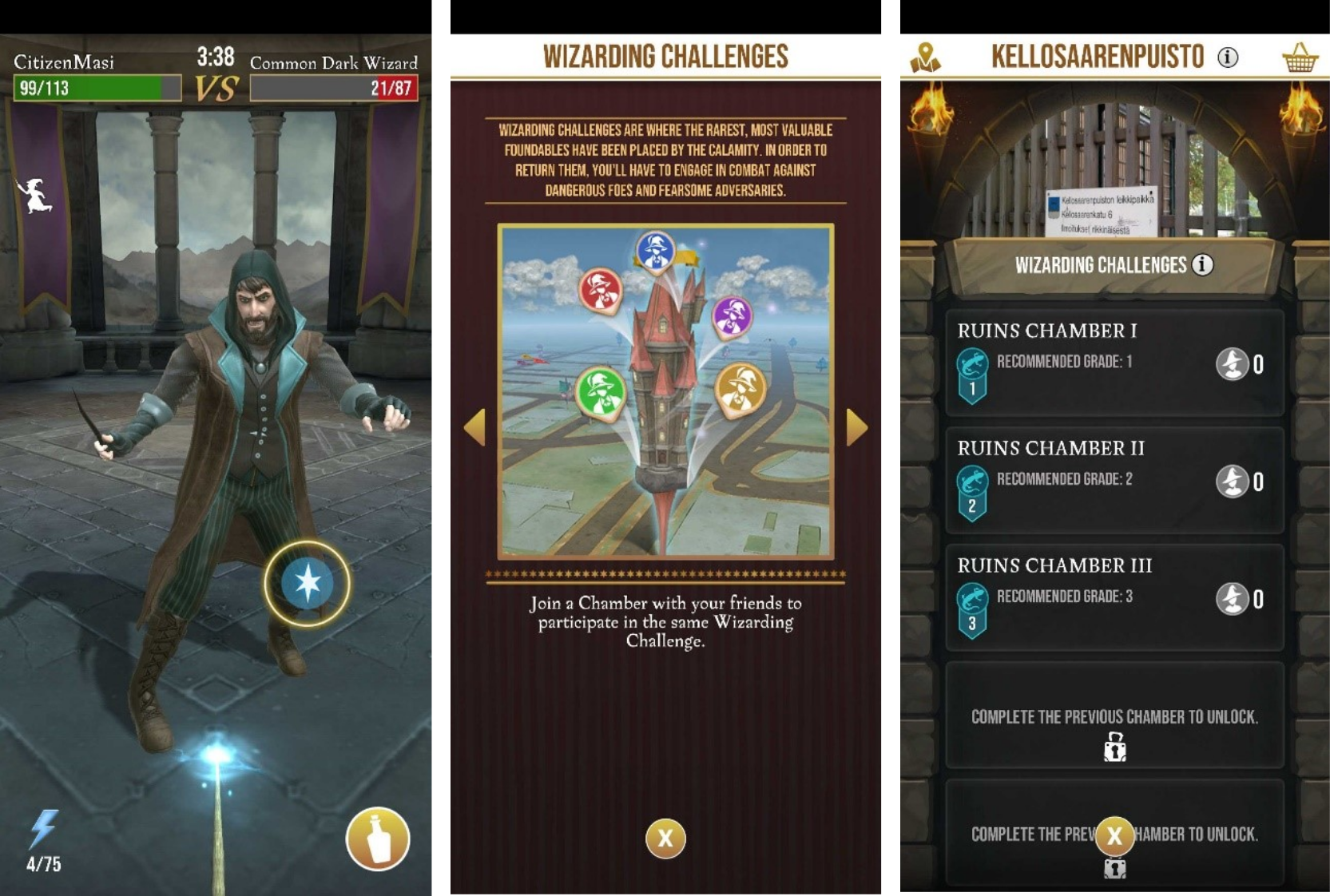 How to get stronger and defeat even tougher Fortress enemies then? Professions are Wizards Unite’s main upgrade/development layer. Players can choose from three different Professions: Auror, Magizoologist and Professor. Each class comes with its own skill tree with different passive boosts + active skills (used in battles). Some Professions are more offensive with more attack spells and some perform a support role with healing spells etc. Each class is also more effective against certain enemy types while taking more damage from some types. 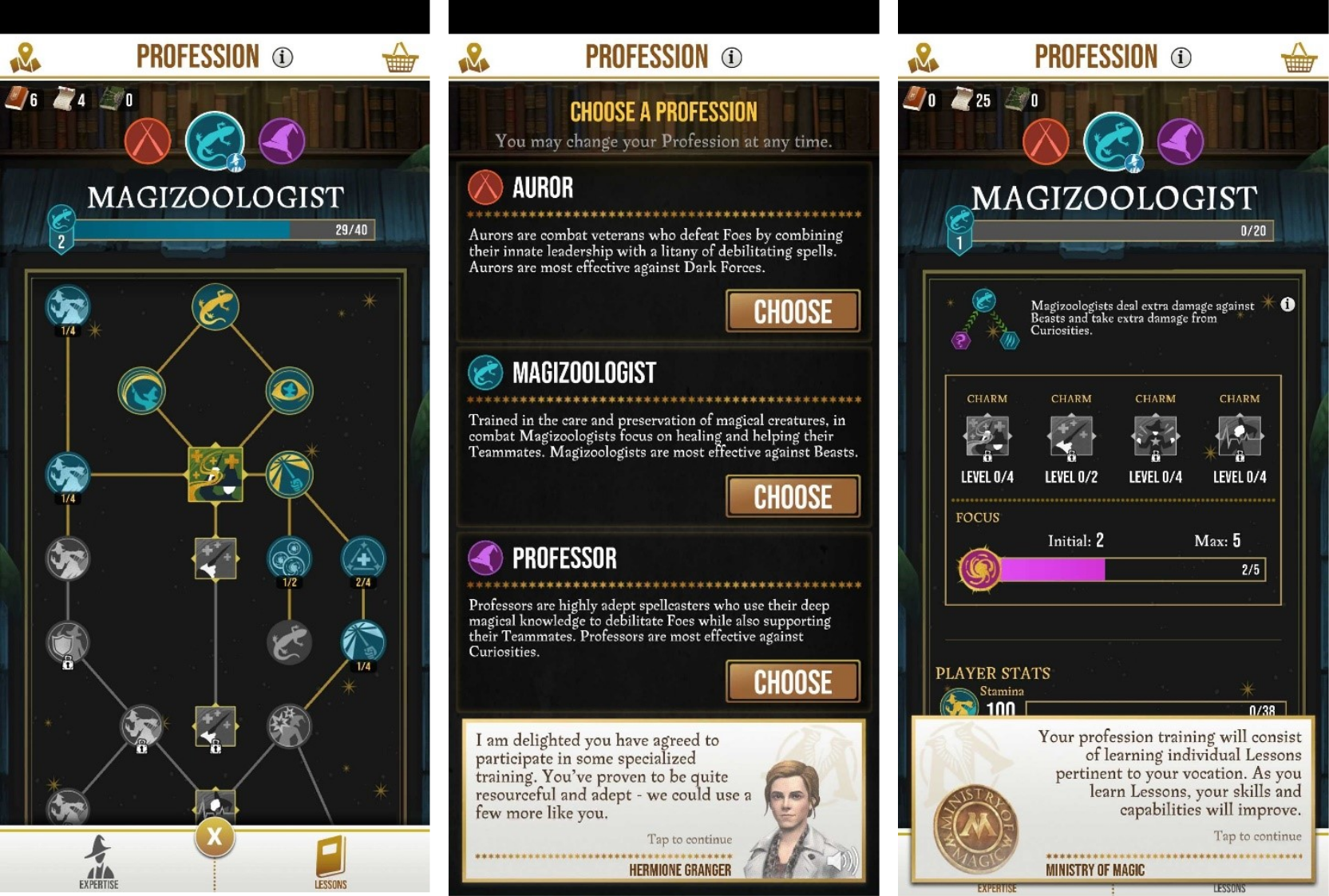 We’ve gone through the main mechanics of the game and how the gameplay loop works in Wizards Unite. But how about monetization, what money sinks are there for players to spend on?

Monetization in Wizards Unite is fairly simple. Gold works as a premium currency in the game, which is used to buy:

If we compare these premium currency sinks to early Pokémon GO, we can see Niantic is pulling a lot of the same strings. 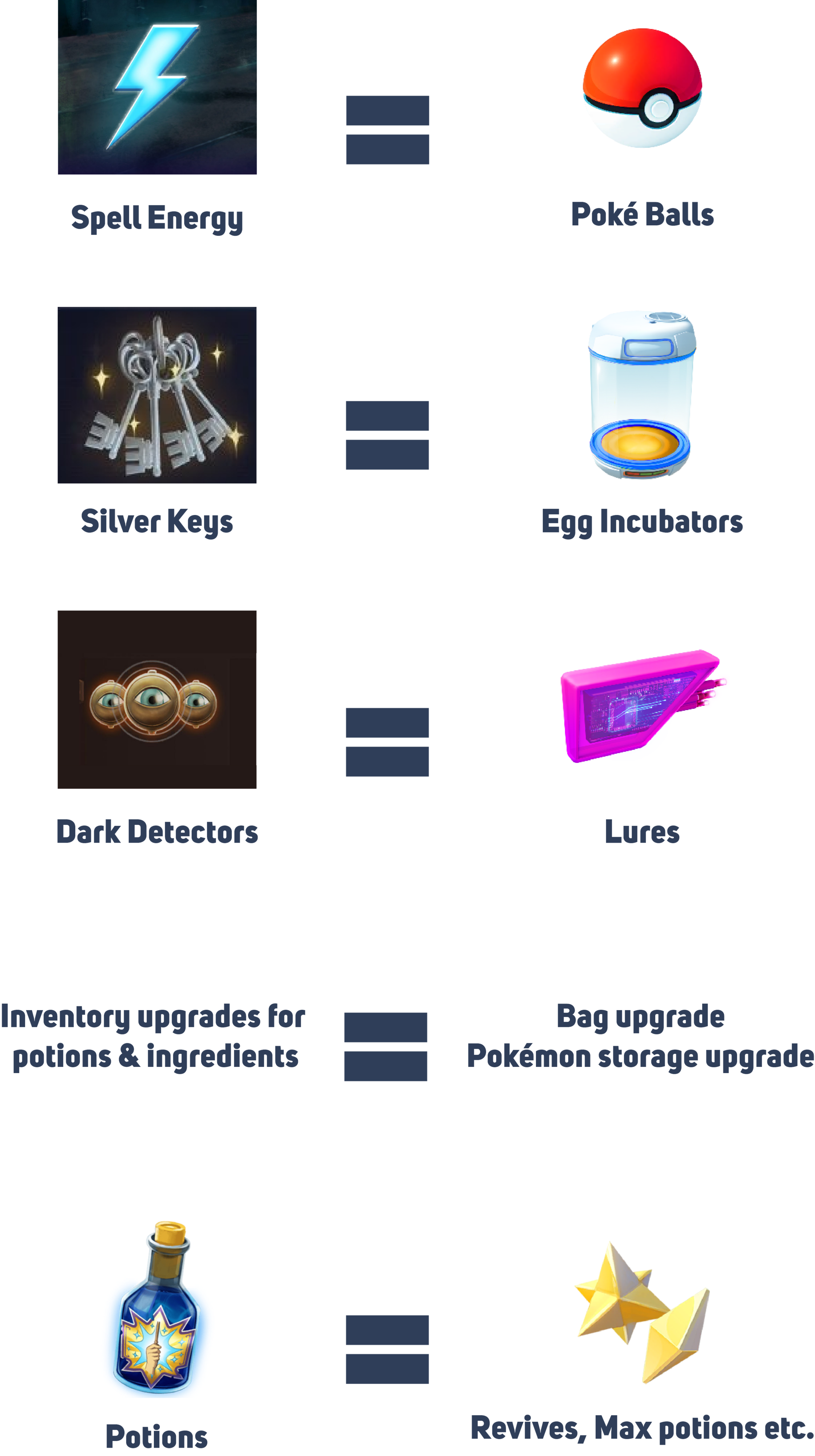 In what feature areas is Wizards Unite lacking compared to the competition?

By using GameRefinery’s “Compare games” tool, we can compare games on a feature level. When comparing Harry Potter: Wizards Unite to Pokémon GO and Jurassic World Alive, we can see where the differences currently lie.

The most fundamental difference between Wizards Unite and these two games is the meta layer. Whereas in Pokémon GO and Jurassic World Alive the meta layer is about collecting characters and developing your team of Pokémons and dinosaurs, in Wizards Unite you collect items and fill your foundable item Registry. At least for me, this is the most significant setback of the game psychologically. Hunting and collecting Pokémons and dinosaurs feels much more exciting and compelling compared to filling a book with items. As a location-based game, I don’t feel as motivated to go walking around trying to find inanimate objects like a magic clock compared to Charizard.

Wizards Unite is also much more story-heavy compared to its competitors. Bits and pieces of the story are occasionally dropped in, and most of them are even voice-acted. It tries to incentivize players to complete Foundable sets and get further in the game by giving more information about the Calamity and the backstory of characters as the player progresses.

Another big difference comes from the social elements of the game. Wizards Unite still lacks a lot in the social interaction department at launch. Currently, the only social feature is pretty much the possibility to play co-operatively in Fortresses. Both Pokémon GO and Jurassic World Alive have guild mechanics, different kinds of PvP modes, donating items/characters to other players, and so on.

Wizards Unite does have Houses in the game which act as a sort of a team/faction, but they have yet to be utilized in any way. What House you belong to doesn’t alter gameplay in any sense. It remains to be seen if will Niantic start to use them, for example, in a similar manner to Teams in Pokémon GO with gyms and so on. 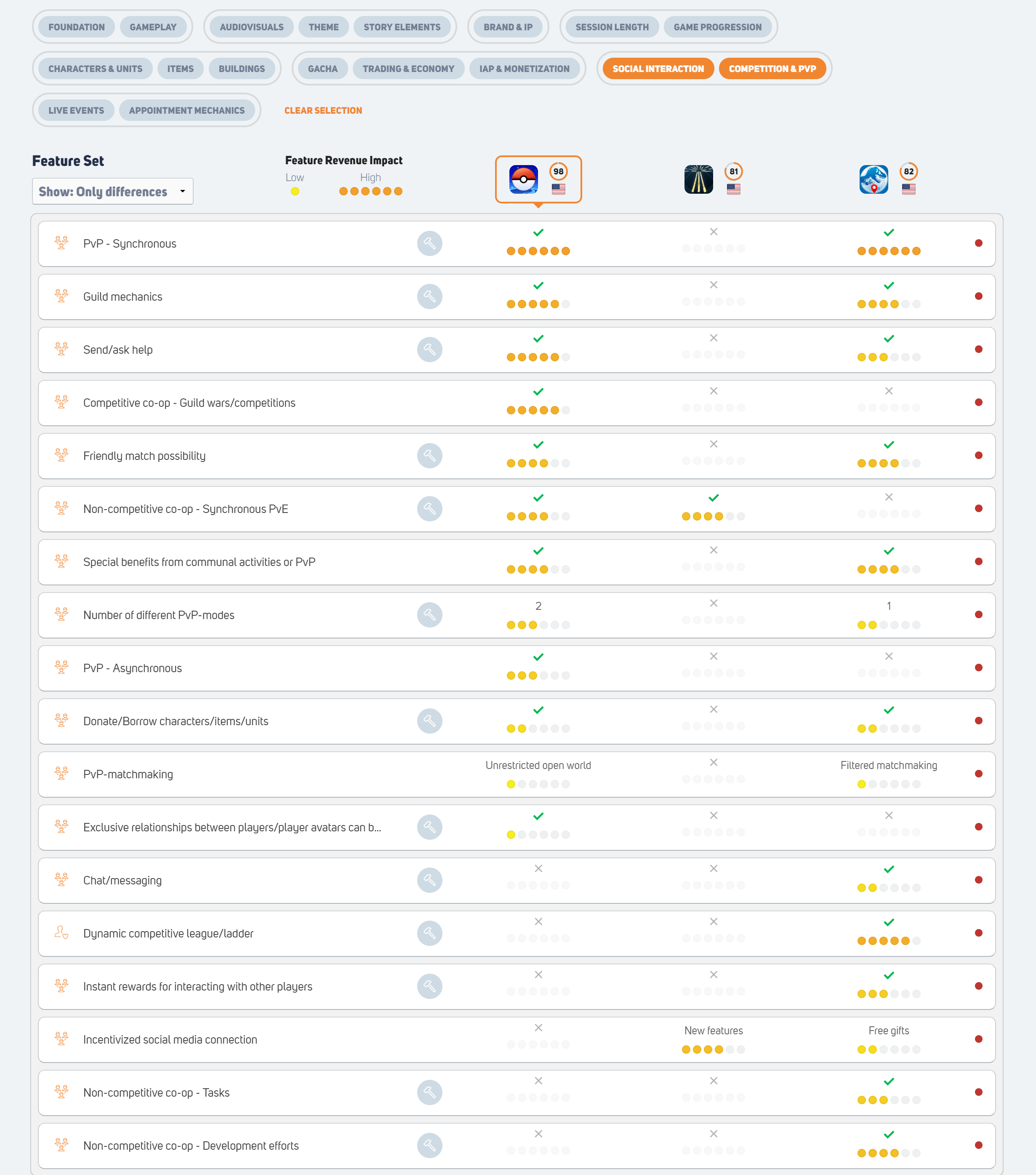 We’re currently featuring these games for free. Sign in and check out all the feature differences and different feature implementation examples from the games here.

It’s still early to make bigger judgments about Wizards Unite, but the overall feeling of the game is that it tries to replicate many of the tricks that Pokémon GO did successfully: the same genre, many similar monetization elements, both have a major IP to build on, and so forth. But even with the Harry Potter IP, it doesn’t have as strong of a game type (location-based game) + IP match as Pokémon had with hundreds of collectible Pokémons. Wizards Unite struggles with making its Foundable collecting meta as compelling and motivating. As in the end, the actual “gotta catch em’ all” part is not as captivating in Wizards Unite, and badly needs more features to flesh out the experience. Therefore, I feel it doesn’t have the same potential/staying power that Pokémon GO has had (at least in its current state).

It will be interesting to see where Niantic takes the game and what kind of features they’ll introduce during their live ops. I expect we’ll find out soon enough, and we’ll be following it closely at GameRefinery.

Sign up to our service to check out Wizards Unite’s feature breakdown and receive daily news of the latest feature changes and events from the mobile game market.

If you enjoyed reading this post, here are a few more you should definitely check out:

Could A Subscription Model Work For Your Mobile Game?